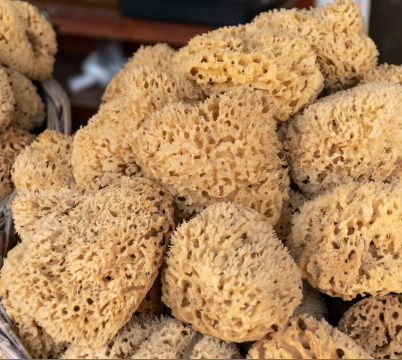 As the Dodecanese thought during the Turkish occupation, only the inhabitants of Symi were forced to give to the Sultan twelve thousand thick and three thousand fine sponges as a tax. Until 1863, the fishing of sponges in the Dodecanese was done mainly with naked divers, while in Symi there were also 250 kangaboos (sponge boats) which operated mainly in winter.

They taught the other islanders how to fish, process and trade sponges. Foreign travelers who visited Greece in the Middle Ages, seeing that only the inhabitants of Symi were engaged in sponge fishing, believed that only at the bottom around Symi do sponges grow.

In 1840, the first Symian diver, Michael Karanikis, dived to the bottom of the sea holding in his hands a flat stone weighing about 12-15 kilos. This stone, which later became known in Symi as “kampanellopetra” or “skandalopetra” in Kalymnos, was tied with a rope, the other end of which was tied to the boat. The sponge brought wealth to the islands. In 1863 the Symian Fotis Mastoridis brought the scuba to Symi, from the Indies where he worked with the British in port projects as a scuba engineer.

To convince the Symians of its usefulness and safety, his wife Eugenia put on his diving suit and dived into the port of Symi. Thus, from 1863, the first use of a scuba diving took place in Symi. In 1864 it was put into use in the other islands of the Dodecanese and from 1866 in the islands of the Saronic Gulf. From 1863 to 1896 the number of scuba divers throughout the Mediterranean reached about 440, while the boats of naked divers were constantly decreasing.

Symi had the largest sponge fleet in the world and pioneered both the primary sector, sparring in the so-called Barbary coast, the coasts of North Africa and in particular Benghazi, as well as sponge processing (secondary sector) and channeling. and its trade (tertiary sector), through Syros, London and the USA. The head of this important industry was the Symian House of Sons Nikitas Petridis known outside Greece as Petrides Brothers under the general George Nikitas Petridis, with offices in Syros, Piraeus, Paris and London.

With the huge income of the great benefactor of Symi, Georgios Petridis, the Petrideio Clock, the Petrideio School and the majestic neoclassical buildings on both sides of the Governor’s Office were built.

The later rulers of the Dodecanese Italians banned sponge fishing during the First World War with the consequent gradual reduction of the population of Symi. So little by little Kalymnos began to take the reins of sponge fishing.

We use cookies on our website to give you the most relevant experience by remembering your preferences and repeat visits. By clicking “Accept All”, you consent to the use of ALL the cookies. However, you may visit "Cookie Settings" to provide a controlled consent.
Cookie SettingsAccept All
Manage consent

This website uses cookies to improve your experience while you navigate through the website. Out of these, the cookies that are categorized as necessary are stored on your browser as they are essential for the working of basic functionalities of the website. We also use third-party cookies that help us analyze and understand how you use this website. These cookies will be stored in your browser only with your consent. You also have the option to opt-out of these cookies. But opting out of some of these cookies may affect your browsing experience.
SAVE & ACCEPT